A possible problem with a batch of Courgette Zucchini from our Mr Fothergill’s seed range has come to our attention over the last 4 weeks. The issue is bitter tasting fruit caused by increased levels of cucurbitacin, that could cause illness if eaten. On discovering evidence of this we have acted as quickly as we could to recall the seeds from sale. The affected seed is from a single batch, batch I, from just one variety. The batch code can be found on the back of the seed packet (see illustration). 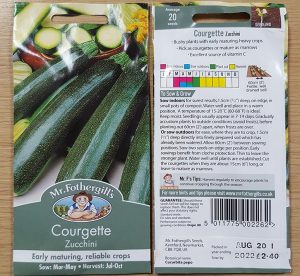 This problem seems to have come from cross-pollination in the field where they grew last summer as a seed crop. Field grown crops for seed are regulated to prevent cross-pollination and it is known in the horticultural world that saving seeds from cucurbits (courgettes, marrows, squashes and cucumbers) is not recommended, due to this cross-pollination risk.  In this case, the seeds crop was most likely cross-pollinated by bees that had visited other cucurbits.  It is impossible to test for bitterness at the fruit stage with the parent plant, as the resulting fruit will produce a fruit that is true-to-type and looks exactly like its parent and will not be bitter.

Gardeners have been in touch with us expressing concerns that they have their pumpkins and courgettes planted alongside each other and are worried that they will create bitter fruits this way.  We would like to reassure them, that this is a completely safe practice. The only point at which the cross-pollinated fruits present themselves as bitter is when the seeds of these plants are dried out, then grown into adult plants the following year.

Below are the steps we have undertaken. 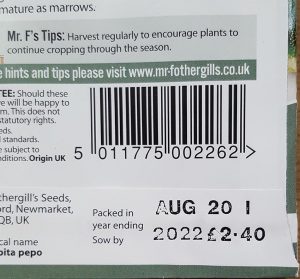 It is important to note that cucurbitacin is a naturally occurring toxin in cucurbits. Although we have identified some seeds that are causing this issue, it is worth all hobby gardeners knowing that plants under stress also produce higher than usual levels of toxins in these kinds of plants.  We experienced an extremely hot April and May this year, which may have led to many plants from this family becoming bitter due to drought and watering issues. The advice in these cases is the same, to taste test with the tip of the tongue on a cut courgette end, and to destroy any plants that are affected. F1 Hybrid varieties are much less likely to be affected by this.

We have been doing everything that we can do to reach out to people and keep them informed and we welcome people sharing this information on to anyone you think would benefit from being made aware.

Klondyke announces its Plant Supplier of the Year