Bow Flowerdew kicked up a storm on Twitter earlier this month. The TV presenter and contributor to Radio 4 Gardeners Question Time took to the social media site to campaign against a total peat ban in horticulture. He wrote that “some seeds, some plants and some scientific research need peat” to be successful and has called for “regulation, licencing and taxation” to control the use of the product.

Not everyone agrees, though. In fact, most of the responses to his tweet argue that horticulture can function without the soil, and that peat bog conservation and restoration is or a higher priority than that of ornamental horticulture.

It’s a debate that has been raging for years, and with the voluntary ban not having much effect, the tables could be turning on those using peat. But is a total peat ban 100% necessary? Would garden centres suffer under the ban? And are peat-free alternatives up to scratch? 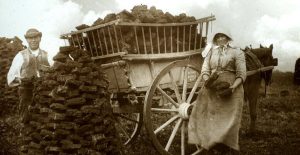 Peat became popular in the horticulture sector in the 1960s when it replaced soil or loam as a component in compost. It was recognised to have a good capacity to hold air and water in high quantities whilst retaining important nutrients. Peat wasn’t a new material, though. It has been used for heating since the Roman times when it was found to burn cleanly and was widely available.

Today, however, peat bogs are increasingly recognised as valuable habitats for wildlife and important stores of carbon. It’s no surprise, then, that the horticulture industry’s reliance on peat has come under fire, and as a result, some businesses are detaching themselves from the controversial product.

Bud Garden Centre in Burnage, south Manchester, is one of these. Brenda Smith, owner of the independent store, is an advocate for peat-free gardening and runs her centre completely peat-free. The aim of her business is threefold: to provide quality plants and gardening products as sustainably as possible; to encourage creative planting and gardening and a care for the environment through sustainable practices; and to trade with customers and suppliers in a fair and sustainable way.

“Peat is a finite resource, a carbon sink,” says Brenda. “The voluntary target of phasing our peat use by 2030 has largely been ignored by the horticulture industry and very few retailers bother to stock one brand of peat-free compost, even though there appears to be an appetite from many amateur gardeners.

“The industry has had plenty of time to adjust but has chosen money and destruction over any commitment to the environment. The environment is too precious to leave to market forces and personal choice.”

Though there are environmental concerns to using peat, a complete ban might not be the answer, argues Bob Flowerdew. Speaking exclusively to GCR, Bob says a 100% peat ban is a populist over-reaction to a genuine and pressing problem. “We most certainly need to preserve and ideally increase areas of peat bog for wildlife and climate change. I’ve always been for a massive reduction in peat use, both in horticulture and more importantly in power stations where it’s still being burnt.”

A 100% ban, though, would have unfortunate side effects that haven’t been considered in this argument, adds Bob. He says he would rather see regulation, taxing and control similar to the use of tropical hardwoods. “We already licence its abstraction, and as substitutes become sufficiently available then a tax on peat will automatically reduce its use. By setting this high enough, peat simply and rapidly becomes uneconomic. This would still allow some consumption where deemed necessary or worthwhile.”

Bob does admit, however, that a ban would have a minimal impact on retail horticulture, saying “there’s probably more peat leaving in the compost of plants sold in pots than actually sold in bags”.

For Brenda, a ban is unlikely to negatively impact Bud Garden Centre at all. “We’ve never sold peat, and many of our plants are grown in peat-free compost,” she explains. She’s also positive about the effect a ban could have on other garden centres, arguing that they “won’t suffer as they will all be in the same boat – gardeners still need to buy growing media. Perhaps it will encourage some to home compost, which can only be a good thing.”

But how do the alternatives match up to their peat-free counterparts? Bob says he doubts “most customers will be very much concerned whether the compost they buy is peat free or not. It’s more about whether it works and if it’s good value.”

Well, according to Brenda, some of the alternative options available are exactly that. “I’d ask the question, ‘is peat a good enough option?’ Certainly not! One of the brands we sell, Sylvagrow, has been awarded many ‘Best Buys’ by Which? Garden. We’ve been selling it for around four years, with no complaints from our customers who travel a good distance to buy it.

“We also use it to grow our own perennials and vegetable plants with fantastic results, and I know that some of the nurseries that supply Bud use it too.”

Bud Garden Centre is potentially showcasing how the industry could cope without the use of peat, and it’s a success story which could be replicated if a ban were to be put in place. If Brenda and Bob are to be believed, garden centres have little to be concerned about, though this is unlikely to stop the debate rearing its head again in the near future.

There is much useful information, gratis, on Bob’s website www.bobflowerdew.com with a hundred plus articles over a huge range of topics, lists of talks and lectures, lists of my books, recommended reading lists (& of other people’s books!), C.V. & genealogical trivia and links to the daily notes on what’s happening in his garden on Twitter.

Plus, with more than two dozen published books in over a hundred editions in twenty languages, Bob now publishes more of his own as well, both as Kindle e-books and good old fashioned printed on paper books delivered to your door, to see these please go https://t.co/x6mJxPy1KN