Legal action against the?owner of a garden centre near Wargrave who lost a long-running planning dispute has been dropped after a judge ruled that it was unfair.

Rob Scott and the owners of seven businesses formerly based at the Hare Hatch Sheeplands were?due to face trial at Reading Crown Court?after pleading not guilty to charges of breaching enforcement notices in May.

But this will no longer go ahead after a hearing on Wednesday ruled the action was based on misleading information provided to Mr Scott during his decision to withdraw a planning appeal in 2014.

It followed?a five-year dispute with Wokingham Borough Council over unlawful development at the site, which came to head in July last year when Mr Scott received a two-month suspended prison sentence and was ordered to pay thousands of pounds for contempt of court.

The three-week trial was due to take place in March but was postponed after Mr Scott and the businesses appealed on the grounds of abuse of process, meaning the council had brought unfair of unjustified legal action against them.

Mr Scott, who was appearing under his birth name Keith Scott, claimed that he had withdrawn the appeal against the enforcement notice in 2014 following negotiations with the council, including Remenham, Wargrave and Ruscombe ward councillor John Halsall and member for planning John Kaiser.

He said he and the council both wanted to avoid a costly public enquiry and instead come to mutually beneficial agreement, including issuing a certificate of lawful use for the site.

The council contended that Mr Scott knew that withdrawing his appeal would be ?very bad? for his planning position.

At the hearing, Judge Angela Morris said: ?The real issue for this court to decide is whether Mr Scott was induced or wrongly encouraged to withdraw his appeal, and, if so, has he, and by extension the other defendants,?suffered prejudice and has Wokingham Borough Council?subsequently sought to take advantage of a situation created by their own actions?

?I find that Wokingham Borough Council did induce Mr Scott to act to his prejudice and when matters were clarified after legal advice was obtained, the position between the parties became entrenched to the point of hostility.

?Whilst Wokingham Borough Council?may not have meant to create this situation, only they had the power to resolve matters and thereby allow the planning process to take its natural course ? especially given the fact that two previous appeals had been abandoned for different reasons.

?This denied Mr Scott an opportunity to have the matter tested in the appropriate planning forum and thereafter they seek to take advantage of that situation to prosecute Mr Scott for alleged transgression of the enforcement notice without recourse to that appeal process.

?The fact they have chosen to do so under these circumstances coupled with the clear and, in my view, inappropriate consideration of seeking to reclaim costs through the application of proceeds of crime, is unjust and unfair and so offends the court?s sense of justice that it must stay the proceedings in respect of all these defendants to protect the integrity of the criminal justice system.?

The previous dispute began in 2012 when the council accused Mr Scott of breaching the green belt and extending a caf? and play area unlawfully.

It insisted that Hare Hatch Sheeplands was only authorised to run as a plant nursery, caf? and farm shop but the other seven businesses were operating from there.

When Mr Scott ignored an enforcement notice, the council took him to court and?the High Court ruled in favour of the council and granted an injunction against the garden centre.

The unauthorised businesses had to leave but not all the changes required by the council were made in time, including the demolition of buildings and the removal of utilities connections, leading to Mr Scott?s conviction. 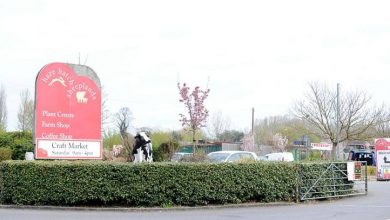