Hartley Botanic?s tradestand at this year?s RHS Hampton Court Flower Show showcases key elements of the Lancashire-based manufacturer?s 79 years of greenhouse design heritage, built on the quality and longevity of its handmade products and originally inspired by Victorian engineering. The stand features a vintage greenhouse built around 70 years ago, and still in full working order, and a Victorian hothouse planting scheme ? referencing an era which was a key inspirer for Vincent Hartley and the birth of the first solely glass and aluminium greenhouse by the inventor and businessman. The tradestand, which also features edible plantings and an arid external garden, has been designed by Longview Design and built by The Outdoor Room, with plants sourced by Burford Garden Company.

The 1950s Semi-dodekagon 9 greenhouse on the Hartley Botanic stand, bearing the original V&N Hartley Ltd logo, was found in a customer?s garden in Northampton in full working order after being installed and reassembled numerous times over a 70 year period. The greenhouse is a physical example of Hartley Botanic?s founding ambition to create ?the finest greenhouses money can buy,? structures which are truly built to last. It is just one of many Hartley Botanic original structures which are still standing such as the Hartley Botanic greenhouse at Belgrave Hall installed in 1950 and the glasshouse in Glasgow Botanical Gardens installed in 1988. The longevity of Hartley Botanic?s greenhouses and glasshouses is testament to the quality of the company?s British craftsmanship and its commitment to the finest materials, it is also one of the reasons why it became the RHS? recommended aluminium greenhouse and glasshouse supplier in February. From the stainless-steel capping screws and durable polyester coated finish, to its extruded aluminium alloy sections, each element of a Hartley Botanic greenhouse speaks of a commitment to enduring strength and performance.

The greenhouse also celebrates the unrivalled engineering design which set the company apart in 1938 and still informs its structures today. One of V&N Hartley?s original models, the Semi-dodekagon showcases engineering design which can still be seen in Hartley Botanic?s modern greenhouses, including self-supporting frames to maximise internal light and space and no glass to glass or metal contact (proprietary to the company). The design is also a Hartley classic and can be clearly seen in the company?s Highgrow and Wisley models.

The historic greenhouse on its RHS Hampton Court stand marks Hartley Botanic?s new 30 year lifetime guarantee which covers both the structure and installation of its greenhouses and glasshouses, a formal acknowledgement for customers of the reality of their longevity. 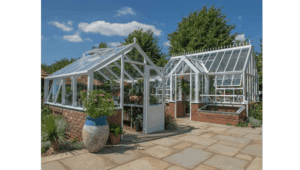 Tropical and subtropical species dominate as the lead planting scheme on the stand, filling both a handmade Victorian Villa glasshouse and Hartley Planthouse 8. Both structures are dressed with architectural, large-foliage and exotic looking houseplants including orchids, palms and airplants. The planting scheme has been inspired by the Victorian era, both in terms of their use of glasshouses as hothouses and their passion for exotic plant collecting. Garden historian Twigs Way commented; ?During the Victorian era, greenhouses were used as a means to showcase and maintain an exotic plant collection. Orchids were extremely fashionable and hunters were sent out to bring back ?the world in your greenhouse?. The focus was on the most tropical of plants and it was connected to status, especially as it was often wealthy individuals who recruited plant hunters to expand their collections.? Using a greenhouse or glasshouse for Victorian-style exotic collecting is also seeing a resurgence amongst British gardeners. Burford Garden Company has experienced a 300 percent 5 year rise in sales of tropical plants and succulents as consumers become more daring in terms of what they can grow and maintain.

The Victorian era was also an important precursor and inspirer for Vincent Hartley?s first solely glass and aluminium greenhouse. Hartley?s strong but lightweight aluminium design was a much-needed departure from its Victorian wood and wrought iron counterparts. The emphasis on sound and intelligent engineering design was also inspired by important Victorian figures such as engineer Isambard Kingdom Brunel and architect Sir Joseph Paxton.

Tom Barry, managing director of Hartley Botanic commented:??We wanted our stand at RHS Hampton Court to communicate something of Hartley Botanic?s almost 80 year old company pedigree. The engineering genius of its structures, inspired by the Victorians, and its enduring commitment to Vincent Hartley?s founding principles of the very finest craftsmanship means the Lancashire business is still flourishing and growing. It also means that, in a throwaway age, Hartley Botanic?s greenhouses and glasshouses do truly stand the test of time, allowing generations of families to enjoy the latest gardening trends ? whether exotic plant collecting or grow your own.?

Longview Design, The Outdoor Room and Burford Garden Company were chosen by Hartley Botanic as both RHS Hampton Court and RHS Chelsea Flower Show partners this year due to each company?s commitment to market-leading quality in both their product sourcing and design work.

All Hartley Botanic?s greenhouses and glasshouses are made to order. Customers interested in purchasing a Hartley Botanic greenhouse should visit: https://www.hartley-botanic.co.uk or call 01457 819 155 for more information.

Talking Tables certified as a B Corporation

Furniture and barbecue sales continue to sizzle in August