Share
Facebook Twitter LinkedIn Reddit WhatsApp Telegram Share via Email Print
The Oaks garden centre in Merley, Dorset is seeking temporary permission to sell cars on part of its site.
?
Residents have already objected to the plans for similar reasons they objected to a car wash on the site.
?

?
They fear both ventures encroach on greenbelt land. But the developers say that the site of the car sales facility has been an ancillary car park and will not have any further impact on the greenbelt.
?
In a statement with the application, a planning consultant explains the majority of the business is on the internet.
?
Interested customers will view vehicles online and make an appointment to view one. 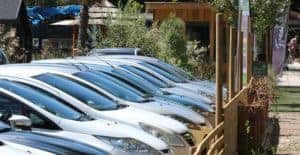 ?In visual terms the use is like a car sales forecourt.
?
“But in activity terms the numbers of trips generated would be much less than a main dealer,? Mr Parke said.
?
?The proposals represent a beneficial use for a confirmed commercial site. There is no greater impact of activity than the existing authorised use.?

?
However, objecting residents claim it is a “token? planning application.?
?
Richard Stevens said he was ?unimpressed that the sale of cars has been ongoing for so long before applying for planning?.
?
?When I look out of a rear window from any one of three rooms, I now have a view of some cars. This, coupled with the potential unnecessary car wash, I feel that the ?garden centre? is being used for anything but.?
?
Frank de Mello said: ?The one thing missing from The Oaks is anything to do with horticulture!
?
?The site is being developed for other reasons than a garden centre on greenbelt land. The application should be refused by the planning committee and not allowed to slip under the radar.?

?
Chris Black said The Oaks? plans represented a ?gradual industrialisation of the area?.
?
?If approved this would increase the traffic flow in a location close to the busy Gravel Hill junction as well as that with Rempstone Road.?
?
The local planning department are considering the planning applications.
Share
Facebook Twitter LinkedIn Reddit WhatsApp Telegram Share via Email Print