A temporary building has divided opinion?in Stokesley after being put up to house a garden centre which had been destroyed by fire.

Strikes garden centre, on the outskirts of?Stokesley, was hit by a ferocious blaze in April this year, which destroyed its restaurant, craft shop, sales area and a second business, Maidenhead Aquatics, which operated out of the venue.

Eight fire appliances and 40 fire fighters from across the region worked through the night to try and save the premises, but the blaze was too intense.

A structure is now being put up in an adjoining field to be used over the next 12 to 18 months while the main structure is rebuilt from scratch. It is now the busiest time of year for the garden centre, but the structure should enable the business to reopen by mid-July ? less than four months after the fire.

A retrospective planning application for the 2025sqm facility has been lodged with Hambleton District Council. The construction will be fully insulated and heated will be installed with a kitchen, caf?, retail area and toilets.

The application has received two objections to Hambleton council and one representation of support.

Stokesley Town Council wrote: ?The temporary building has already been erected and is far larger than the surrounding buildings and completely out of context with the surroundings.

?If the Planning Committee is minded to approve, then this should be for a specified period of time, eg. 1 year following which a shorter period eg. 2 months to demolish a remove from site and return the site to a field.?

One resident, who neither objected or supported the construction of the temporary building, said he considered it a ?blot on the landscape that should only be tolerated for a limited period until the permanent building is in use?.

One objector to the council said: ?Seen the structure today ? huge! Not in keeping with surroundings and appears to be much larger in height than the previous build.?

But another resident said: ?I fully support this ? and applaud Strikes for being so proactive, determined to get back on their feet, support the town and very importantly support their staff.?

The opinions have been echoed on social media, where some people have claimed the obstruction is too large and blocking views of the Cleveland Hills from Stokesley.

One wrote on the hyperlocal Facebook site, Save Our Stokesley: ?It doesn’t have the look of a temporary building. If it is it will take some serious deconstruction. I agree it’s huge but I’ll keep the faith in Strikes and hope that the final construction is in its original form.?

Others posted that without the temporary building, local staff could have been deployed to garden centres within the chain across the country or potentially lost their jobs, with one posting: ?They are trying to save a long established business, that brings jobs, visitors and subsequent revenue to our town.?

Another stated: ?Absolutely fantastic to see Strikes pulling out all the stops to restore the business as quickly as possible after the fire. I would urge you to reserve any criticism if and until any regulatory breach has occurred.? 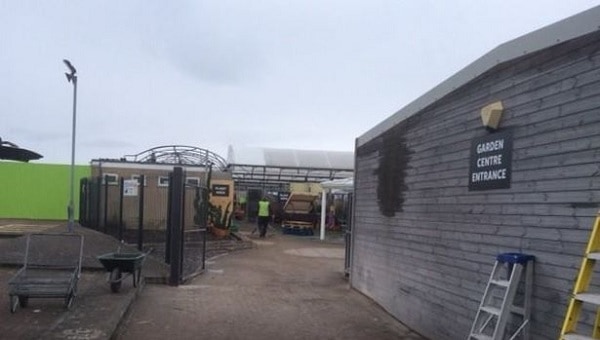