Research undertaken by Flymo has revealed that the UK is the last European country to turn on to robotic mowers. 75% of respondents are just not interested in robotic mowers despite huge popularity in Europe. Garden Centre Retail recently caught up with Flymo?s John Thompson,?Product and Marketing Director to see why this is, and what retailers can do to change this.

Since its invention 21 years ago, less than 4% of British adults have owned a robotic mower. Yet in Sweden, France, Germany and Switzerland sales of robotics now make up a big share of the lawnmower market.

According to the latest research, 75% of Brits surveyed said they are just not interested.

Why hasn?t the British public taken to robotic mowers? 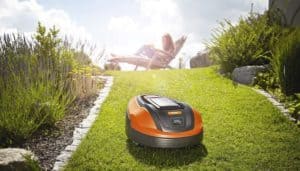 They are grasping the idea of Robotic mowers, they just haven?t accepted it quite as readily as our other European counterparts.

Partly because we tend to have a more traditional approach to gardening. It’s also partly because we find it hard to justify the?expense for the size of gardens that we have. Not?enough people know enough about the products and what they think they know isn?t always right.

For example, one of the main misconceptions is that the robotic mower collects grass as it cuts it, just like a robotic vacuum cleaner collects dust. Once they?realise that it doesn?t need to collect the grass at all, ?the public looks at them much more favourably.

Flymo’s goal is to raise awareness as in the UK. It?s a?great time saving tool but it?s more than a lawnmower. It becomes more a way of life.

How can the British retailers change this? ?

By giving robotic mowers a small space in store. That will help grow the awareness. This, helped by the fact that it has been developed and produced by a?leading lawnmower brand. It should mean centres have confidence that this product really works and is suitable for a wide range of lawns.

How is Flymo raising awareness to the public?

Flymo is currently running a large marketing campaign circa ?850,000. Alongside a TV advertisement, Flymo has also developed and released a game in order to engage with a younger audience. This is spreading awareness of the benefits of the product.

Although the public aren?t taking to robotic mowers, can garden centres make money from this sector? 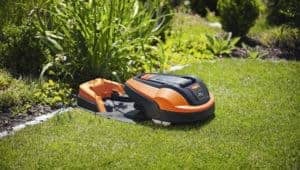 The public are taking to them; generally those that have them love them.? It is just that we are still very early on the adoption curve.

There is much more to come here in the future. Garden Centres should embrace the technology as?many of their customers can benefit from these products.

Has television advertising worked so far?

Our ambition is to communicate this concept to the UK gardeners and that is certainly working. We have more interest in the robotic lawnmower this year because of our campaign and sales have increased.

Flymo believe that the UK will eventually catch up with Europe, but there?s still work to be done. Cost (46%) and whether it would save any additional time (23%) the biggest barriers for those surveyed.