The Hereford-based Wyevale Nurseries has submitted Morus ?Mojo Berry?, Edelweiss ?Blossom of Snow?, Alstroemeria ?Little Miss Zoe? and Agapanthus ?His Majesty? to name but a few, to the event, which takes place on June 20 and 21 at Stoneleigh Park in Coventry.

Ben Gregory, product development manager at Wyevale Nurseries, said: ?The New Plant Awards at the HTA National Plant Show are sponsored by the Royal Horticultural Society (RHS) and showcase the best in new plant introductions from UK plant suppliers. During the past six years, the awards have grown and are now seen as the place to find the next best-selling plant for retailers.

?This year we are excited to be entering seven new products including Morus ?Mojo Berry?, which is a revolutionary new dwarf variety of Mulberry that fruits at a young age. Reaching just 75cm tall and 45cm wide, ?Mojo Berry? is a perfect patio plant suitable for any garden.

?It is self-pollinating, fully hardy and fruits on both new and old wood, meaning it will be producing mulberries within the first year as opposed to the usual eight or nine years it would take. Another unique feature about ?Mojo Berry? is that it will produce fruit throughout the summer from May until September, not just a three-week period at the end of summer.

?Edelweiss ?Blossom of Snow? flowers like no other, not just once but twice a year, in summer and again in autumn. ?Blossom of Snow? has large star-shaped, pure white flowers with a yellow centre, which gives a refreshing look combined with its silvery foliage. It grows to 40cm high and 60cm wide. This perennial is an excellent choice for rock gardens, mixed planting, perennial borders and as solitary in a container.?

Alstroemeria ?Little Miss Zoe? starts out as green and cream and gradually develops into a bold green and white as the season develops. Deep pink to red flowers are produced all summer long, which creates an eye-catching contrasting display. ?Little Miss Zoe? has a very neat, compact and rounded habit, forming a small ball up to 40cm by 40cm over time.

Ben added: ?Alstroemeria ?Little Miss Zoe? is a real stunner! Another of our new plants we have entered in to the prestigious awards is Agapanthus ?His Majesty?. From June through summer, it offers a stunning display with large heads of vivid, deep blue to purple flowers, which are held proudly on slightly taller stems. 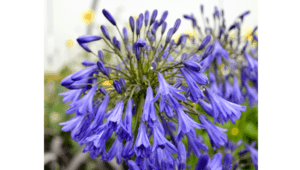 ?It is a complex hybrid, which gives it vivid colour, strong stems and a long blooming period. It was bred by Rod Richards of New World Plants in Herefordshire.

?We have also entered Phormium ?Blondie? a distinct new Phormium, which has a unique weeping habit unlike any other. ?Blondie? will grow into a tight clump up to 80cm tall and 60cm wide with a distinct, strongly arching habit, similar to a chlorophytum. The leaves are variegated with a cream stripe down the midrib and a green margin. ?Blondie? is particularly suited to growing in a patio container where it can be left to gracefully arch over the pot.?

Hydrangea ?L.A. Dreamin? is different from other hydrangea macrophyllas because of its ability to generate different coloured flowers on the same plant. Besides pure blue flowers and pure pink flowers, lavender and shades of all of these colours are produced. This trait becomes more pronounced as the plant ages in the landscape.

Ben continued: ?Our final plant entered for the New Plant Awards is Veronica ?Pink Passion?. It is a very neat and compact grower that makes the perfect pot plant. ?Pink Passion? is extremely disease resistant and the leaves stay very clean and green all season.

?In early June, it produces masses of bright pink flowers that are displayed through the rest of the summer. ?Pink Passion? makes a fabulous container plant and is perfect for use in a mixed planter. It was bred by local breeder, Chris Smith, who is based just outside of Worcester.?

The HTA National Plant Show takes place on Tuesday, June 20 and Wednesday, June 21 at Hall 2 at Stoneleigh Park in Warwickshire.

The product selection available from Wyevale Nurseries is enviable across the industry and the talented team regularly introduces new, award-winning plant varieties.

For further details about Wyevale Nurseries, which is based in Hereford, please call 01432 845 200, visit www.wyevalenurseries.co.uk, follow the company on Twitter at www.twitter.com/WyevaleNurs or log on to www.facebook.com/WyevaleNurs.